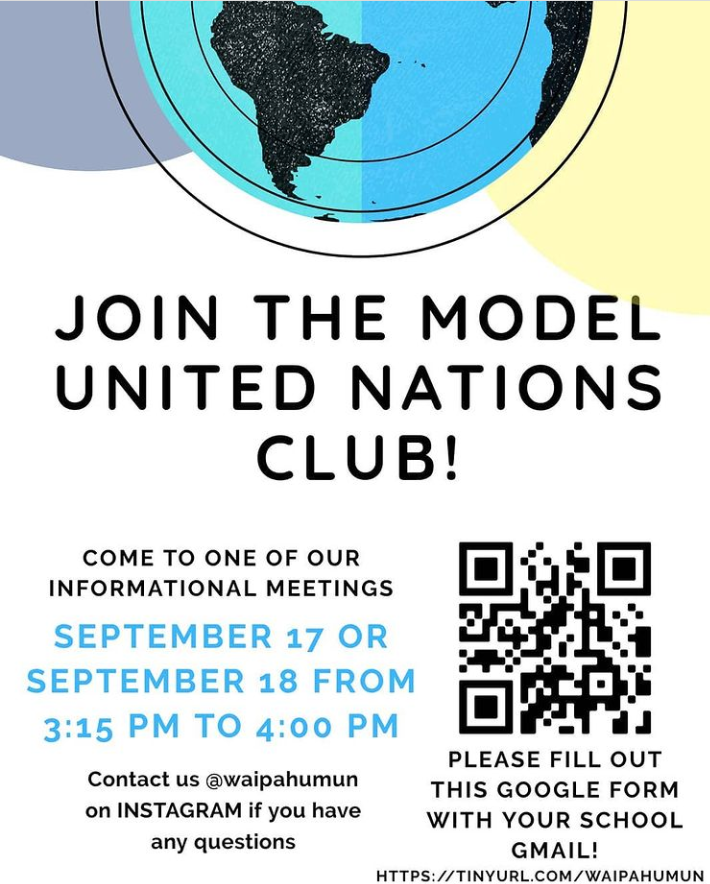 Like many other clubs, The Model United Nations club uses virtual flyers and other online tools to share information and hold meetings.

Student Government hosted a virtual club rush which gave clubs the opportunity to display their goals and missions. As these clubs try new virtual efforts, they have had successes and challenges.

The LEO (Leadership, Experience, and Opportunity) Club is primarily based on community service activities. They were able to promote their club by using their Instagram page, @leowhs, to recruit members. Leo Club senior Grace Chinen says that it was difficult for them to promote their club since they felt that it lacked a lot of the personal feeling that they tried to convey through their club. Recently, the club participated in the Susan G. Komen Race for the Cure to raise awareness for breast cancer research.

The Key Club provides its members with opportunities to provide service, build character, and develop leadership. They promoted their club by using their Instagram, @waipahu.keyclub, and had officers and members post about the club on their personal accounts. They created sign up forms on Instagram, then added potential members to Google Classroom and GroupMe chats. Key Club members have been able to partake in virtual service projects, meetings, conferences, and socials. Key Club senior Shawn Nicolas says, “The advantage of the recruitment process was that it was very fast since it was all online. The disadvantage would be club dues.” They used Venmo to have members to pay dues, which made it difficult since some students do not have access to it.

The Model UN club was able to recruit members by advertising on social media, spreading the word among their family members  and friends, and having teachers post recruitment flyers on Google Classroom. While they were able to gain a lot of members and participate in virtual conferences this semester, one thing the club has struggled with is time. Model UN junior Mary Calamayan says, “It was hard choosing a day where the majority would meet.”

The Korean Club promotes the learning of Korean culture, language, and traditions. The club was able to recruit their members by advertising on social media and posting on campus walls. However, the Korean club officers and advisor say,  “Students aren’t physically on campus together. There is an overall disconnect amongst them, making ‘word of mouth’ announcements impossible and the recruitment process harder than ever.” Nonetheless, they were able to plan movie and game nights, do K-pop dances, play traditional Korean games and activities like jong-i jeobgi (origami) and dakkji (similar to pogs), learn Hangul and common Korean phrases, and more.

The Fil-Am Club promotes unity and fellowship among students of all different backgrounds on our campus, not only students of Filipino origin. The Fil-Am Club had a lot of time to think about the future of their club when campus first closed. Like the Korean Club, the Fil-Am club found it difficult to spread the word about their club, and to find virtual activities since most of their previous activities were games. The club is planning to continue their “Fil-Am Fridays” that occur every two weeks. These include movie and game nights, study sessions, and online games and activities.

All clubs had challenges with recruiting members virtually, but they were able to adapt by keeping a positive mindset and seeking new ways to engage their peers.