Arthur Awards in the eyes of three generations 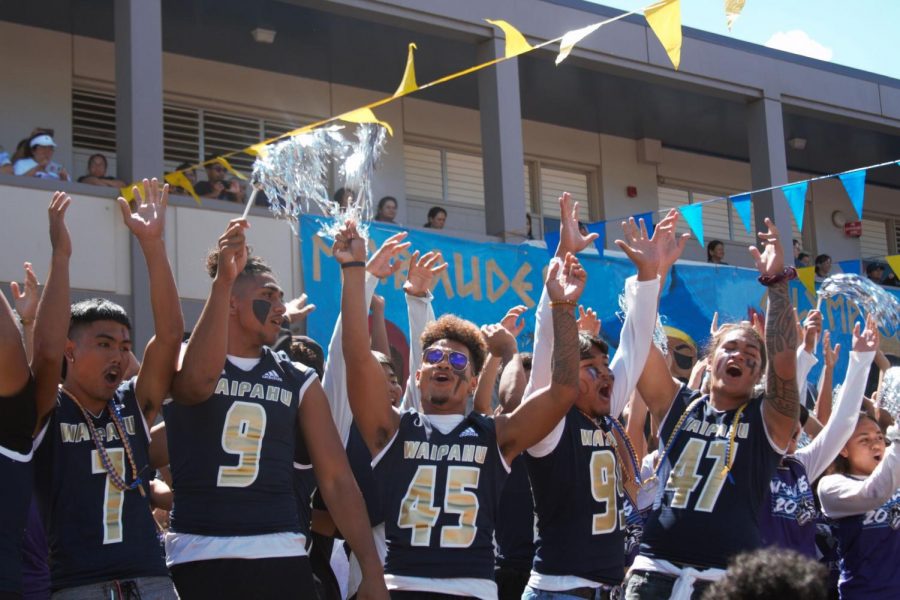 The senior class cheers at the 2019 Arthur Awards.

It is the last day of homecoming week. Students are eager to get through the school day as they sport their class shirts, jerseys, hats, pom-poms, and more before they head down to I-Quad, where they will compete for the first place Arthur Awards title. This competitive yet spirited nature is what homecoming week is all about at Waipahu High School (WHS). It begins with an intense game of tug of war, which is followed by the singing of the alma mater and chanting of our school colors, then ends with the annual Arthur Awards tradition.

According to the WHS website, “[The] Arthur Award Competition is the high point of the year. It promotes school unity and spirit among the students of Waipahu High School through interclass competition during Homecoming Week. Arthur Competition consists of the Arthur Award Rally, Blue/Gold Day, and Alma Mater competition.”

However, has it always been like this? Sandy Suan, also known as “Aunty Sandy,” is a longtime resident of Waipahu and a current school security guard. She was part of one of the first classes to graduate from WHS after the transition from its former site in 1969, which is now known as Waipahu Intermediate School. Although Arthur Awards was not an official event until later, Suan says that the school spirit was always there.

“Homecoming was our biggest thing. Our school, we just made it where everybody got together. It’s not like how it is now, but everybody was together and everybody enjoyed themselves,” Suan said.

Erin Medina is one of the many faculty members here at WHS who is also a WHS graduate. Having graduated with the class of 2004, the Blazing Dragons, Medina notices the differences in Arthur Awards between her high school years and now.

“It wasn’t like how it is now. It was competitive, but now it’s really competitive. Our cheers were shorter, we had no dance moves, and all we had were pom poms. Now, as we go up in the years, from freshman to senior year, there’s more cohesiveness. I see a bond that is stronger today than what I have seen before.”

Till this day, WHS honors this tradition, as it has for decades. The competitive spirit is still very much alive, and will continue to flourish as each class gains a sense of school spirit and builds a connection.

Now, for many seniors, Arthur Awards is the last chance to prove themselves, to show the rest of the school their dedication to winning and their pride in Waipahu. Georgette Hutchinson, a member of the 2020 Luminous Wolves class council and one of the main students who teaches the senior class their cheer, shares her homecoming experience.

“Being a council member, Arthur Awards has been a challenge every year. It’s always great to teach our class the cheer and it really makes me happy knowing that they’re having fun. Our school really does show our spirit and I am proud to be Marauder. Arthur’s Awards has been going on for such a long time and I honestly wouldn’t change anything. It’s the event everyone looks forward to and without it, this school would be dull,” Hutchinson said.

Community and school pride will always be what WHS is known for. On top of the many educational and academic opportunities the school has to offer, the Arthur Awards will remain WHS’s most prized tradition.