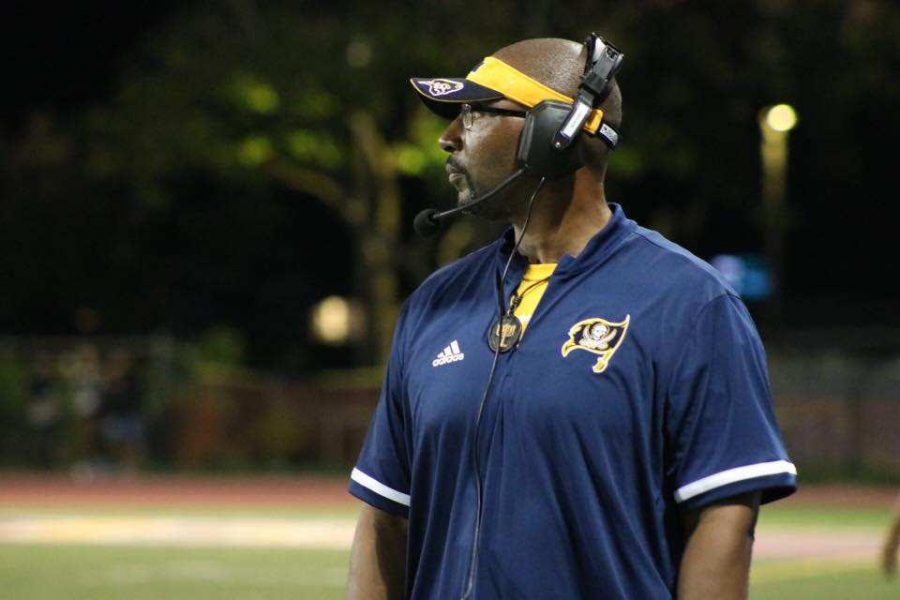 Waipahu High School football defensive coordinator Ronald Johnson served in the United States Marine Corps for four and a half years. Johnson believes teamwork is the core value of both football and the military: “You find a lot of football teams lose because of selfishness. They won’t work as a team. Teamwork makes the Marine Corps successful. It’s not that the Marines are dangerous. It’s that they love each other and it makes you want to perform better for someone that you love.”

Johnson is a special education teacher at Waipahu High school. He is a disabled veteran with combat-related injuries and was honorably discharged from the Marine Corps as a Corporal.

Growing up, Johnson explained that he was always fascinated by the military.

“I always played with G.I. Joes, and always dressed in camouflage. In high school, I was in JROTC; it was just something I always wanted to do.”

Once he became a Marine, Johnson describes his service as something that perfectly met his expectations.

“Boot camp, I absolutely loved it. I was one of the ones where it was all that I thought it would be and more. The physical combat part, I loved the fights. I loved to march. I loved the discipline of it,” Johnson said.

Another aspect of being a Marine that Johnson enjoyed was all the traveling. “We were able to see a number of countries like Norway, Spain, Italy, Bulgaria, Romania, Turkey, Egypt, Somalia, Ethiopia, Puerto Rico, Haiti, Cuba, Japan, Okinawa, Israel, and so forth and so on.” During his service in these areas, Johnson elaborated on his daily life as a Marine, saying, “There was no set daily routine in the Marine Corps because we were grunts, so we would have various different types of training like cold weather training, desert training, rock training, rappelling, and swimming depending on what type of conflict we were going to.”

When asked how his service affects his life now, Johnson said, “It turned me into a disciplined man. We learned that discipline is a way of life, not just following rules and paying attention to the small details of things adding up to the bigger picture. If you can focus on yourself and your life that way, then you’ll live your life in an honorable way.”