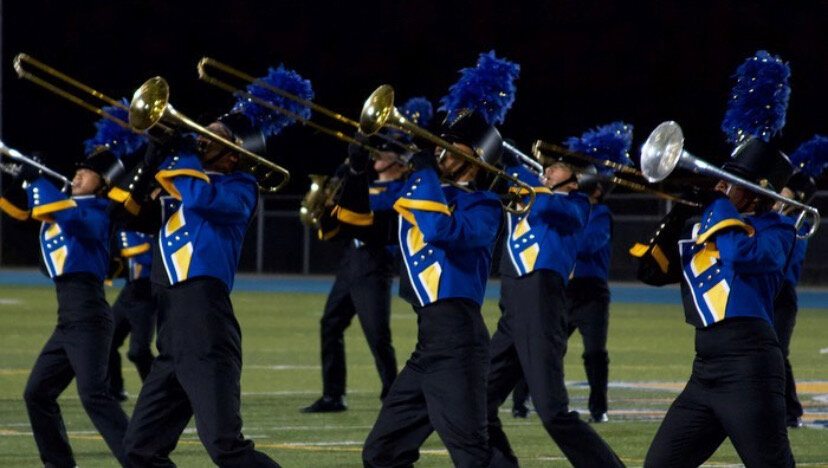 The marching band is one of Waipahu High Schools’ most hardworking programs. From practice on Tuesday, Thursday and Saturday for several hours under the hot beating sun, the team deserves a great deal of recognition. Fortunately, the band is given their very own last performance at the high school. This last performance is to honor the students who participated in the program, along with everyone who helped. This is also the marching bands’ senior night. The parents announce each senior and what they have done up until this point and honor them with leis.

One senior in particular, Lauren Ragasa, has never done marching band before this year. This last marching band season was her first year as a color guard.

Ragasa says, “I was not really into color guard when I first started. I thought that it was too complicated for me and too much on my schedule. I then realized that it wasn’t the exercise or physical activity we went through. It was the people there. They are so loving and kind and incredibly funny. I was planning on quitting, but the color guard made me stay.”

Band director Mr. Henry Fu chooses the theme of each show. This year, the theme is “Reflection.”  Before the marching season starts, Fu and the marching staff discuss what the theme is going to be and how they are going to execute it. This includes discussions about music, various visuals, routines, and other things to make the show stand out.

The show consists of three movements, which are the different sections of the show. Before the show begins, the band warms up on the sidelines in an arc while the color guard sets up their equipment. This also gives a chance for the band’s stationary percussion, the pit, to set up. After the warm-up, the band and color guard gather at the sideline to do their famous cheer to get their blood pumping, led by their drum major, Marlon Francisco.

Francisco is now a senior. He started his role as drum major as a junior, being the band’s first ever non-senior drum major. He believes he has drastically improved as a leader since he started back in 2018.

Francisco said, “I felt I lacked a lot of leadership when I first started. I got scolded by Mr. Fu a lot. But this year, I felt good. I stood up and decided that it was time to do the job I was given. Everyone started listening, I was receiving more respect and I felt more like a leader. At the end of our last performance, I really made my mark on the band as a drum major.”

“Reflection” starts off with a beautiful quartet. The band and color guard surround mirrors, imitating reflections of each other, hence the title of the show, “Reflection.” The band then breaks out into a drum feature while the color guard dances.

The second movement is where the message of the show really shines through. The mirrors are then set in an arc of dancers, with one lonely dancer in the middle. She attempts to find peace within herself throughout the several reflections she ventures to, but is ultimately rejected. With the climax of the band, the color guard breaks into eight-piece duets that showcase the malevolent energy that Fu tried to convey. The last movement is a mashup of all the movements combined into one. It communicates the message of accepting of one’s image, no matter their looks.

Fu ultimately wanted a show for students to relate to.