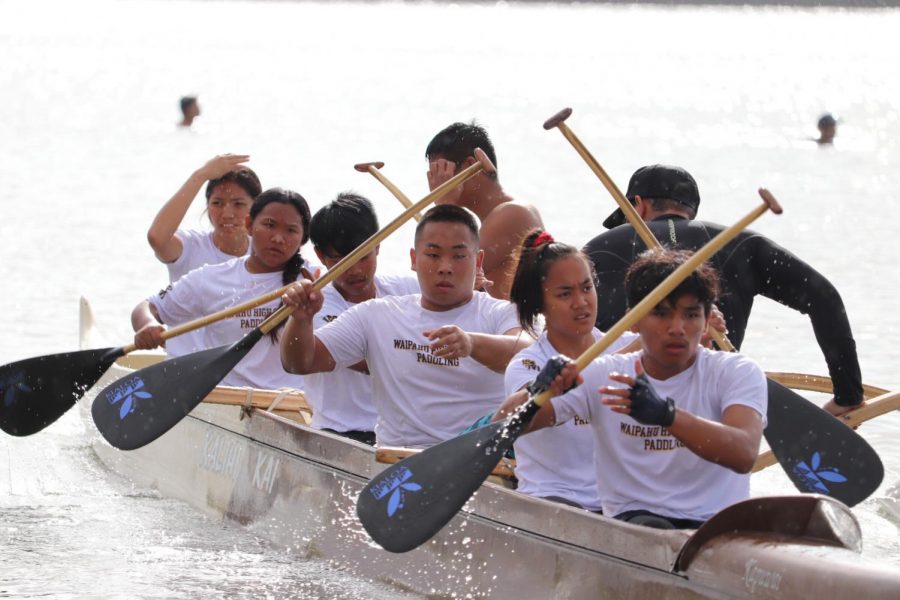 Jonathan Matsumoto has been the head coach of the WHS paddling team for four years. This has been one of the most memorable years of his coaching career, as the team of 20 had only four experienced paddlers and 16 new paddlers at the start of the season.

“In such a short time, I had to train them for a new sport, and then we had races at the end of the week,” Matsumoto said.

Matsumoto started the season in September 2019 with dry land conditioning, then slowly taught the basic techniques of paddling in the water the following month. Paddlers learned everything from reaching out to sitting up to everyone’s role in the boat when doing uni (turns).

Senior mixed varsity crew steersman Ku’ualoha Andrade said that the hardest thing this season was “accommodating everyone’s style because some of us learned how to paddle a different way than others.”

With newcomers learning techniques and returnees adjusting to paddling in the same style, the team had challenges getting everyone to work together to make the boat glide.  Before the team could perfect their technique, it was crucial for the teammates to bond and develop trust inside and outside of the boat.

“I think that our whole team had a really good connection with each other,” senior paddler Kylie Sylva said.

“We have never gone this far and we have new paddlers, but this showed me that their consistency, hard work, and really wanting it was a burning desire for them,” fellow coach Janice Roach said.

The HHSAA state championship took place on February 8, 2020 at Keehi Lagoon. The team was not able to advance to the finals, but many were proud of the team for exceeding expectations.

“There were many OIA coaches that came up to me and said that they were amazed that a team with three new paddlers made it to states,” Matsumoto said.

“Whether they win or lose, in my eyes, they are all winners because of their personal growth and physical growth,” Roach added.