How to make compost 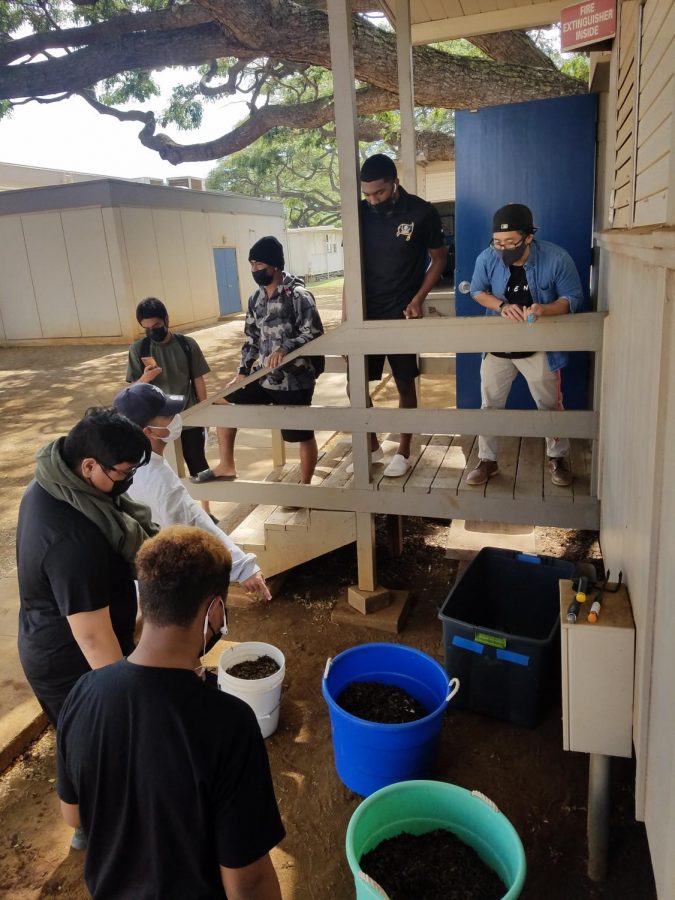 Campuspos (far right) and his students examine their class's compost.

While Waipahu High School science teacher Arbie Campuspos was a graduate student during the pandemic, he wanted to learn something beyond his coursework. San Francisco’s mandatory recycling and composting approach and the documentary “Kiss the Ground” inspired Campuspos to try composting. When he moved back to Oahu from San Francisco, Campuspos decided to start making compost himself: ”So I tried it. And then it was definitely trial and error. It didn’t make sense the first time completely. So I tried it again, kind of like a science project. And then I’m still doing it.”

Campuspos incorporates the science of composting into his marine science class by instructing his students to create compost in “business teams.” Through this class, students have learned how to create and maintain compost.

Many of Campuspos’s students weren’t expecting to have the majority of the class focus on composting. “I was expecting to learn about the ocean and a lot more lab work,” says Joshua Long (’22). But in a way, composting is indirectly connected to marine science through the carbon cycle.

Nicholas-Bailey Muraoka (‘22), another student in Campuspos’s class, explains, “Carbon can be better absorbed into the soil if it is healthier, hence the composting. The carbon cycle relates to the ocean, which can hold a similar amount of carbon; however, it is better to spread the carbon evenly as it helps foster life, and so we are focusing on the soil.”

Composting is a natural system we can use to combat the damage that humans have inflicted on the environment by getting too comfortable with the convenience of landfills.

“All the trash has to go somewhere,” Campuspos says. New, unnatural systems throw off ancient systems that are supposed to keep the earth in balance, threatening ecological collapse. Campuspos believes that composting is a natural system that can help bring the earth back on balance. “Things will naturally find a way to rot. We are retrying to learn how the Earth was keeping itself together before without human intervention,” he says.

Composting also helps society as a whole, potentially reducing the greenhouse effect and restoration of soil. It can also serve as fertilizer for farms and even home gardens and house plants.

The first steps to making compost are simply gathering materials and finding a place to put the compost.

Then, there are four essential ingredients you need in your compost:

3) Air: compost must be mixed daily or every other day to add air back into it.

Campuspos says, “In San Francisco, the rule of thumb was anything that used to be alive could go into your compost. Like chicken bones, meat, dairy [products] because they come from cows, chopsticks because they come from trees […] They have a huge industrial composting facility, so it’s hot enough to kill all the parasites found in meat products.”

However, if you are composting at home, avoid putting meat, dairy, or bread products into your compost. They attract vermin and pests, and at home, compost will not get hot enough to kill some parasites found in animal products.

Items that you can put into your compost at home are “greens and browns.”

If you do start composting, keep in mind that it doesn’t have to go perfectly. It may involve a lot of trial and error because “it’s the scene of rotting, and that’s something you don’t need to keep perfectly controlled,” Campuspos says.  “It might not be perfect the first time. There is no real way to ruin compost. It will eventually get to where it needs to; you might just be taking a detour.”

There are many different ways that you can go about composting; it just depends on how much time and effort you want to put into it. This table details the pros and cons of several methods: 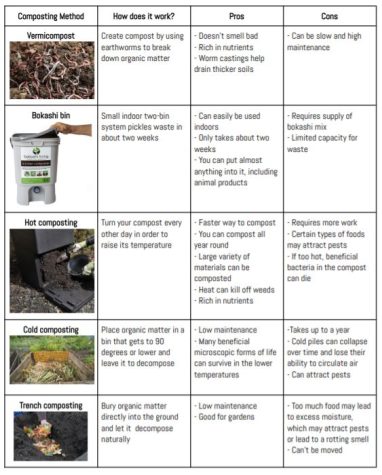 After your compost is done, you can add some to soil as a soil amendment, or use it as fertilizer for plants. Some farms may also accept compost. You could also make compost tea, which involves letting the compost soak in water. The nutrients leach into the water, which you can use to water your plants.